A downloadable game for Windows, macOS, and Linux

another piece of candy: sweet fusions is a fusing card game with one simple goal--to present the cutest card!

i've left this game open source, so feel free to use/modify the code to use in your own ren'py game if you'd like. (please replace the art+audio assets with your own, obviously!) credit is much appreciated.

NEXT UPDATE: demon expansion! i'll be adding cards from contract demon and first kiss at a spooky soiree!

please feel free to leave suggestions in the comments for new cards or features you'd like to see in this game!

oh my god yes.. i hope this gets expanded upon someday, i really love ur characters, games, and world, and having a card game about them is a great idea hehe

the game was fun I hope it gets updates

Is Periwinkle in this?

Reply
Nightstar Of Darkclan1 year ago(+2)

This seems very cute and I can't wait to play it as long as my laptop allows it, but I can also see myself trying to do that source coding thing so I can make a card game for only my friends and I and so I can also see how the coding looks, anyway I love Treat as well, they are the most adorable wolf girl I have ever seen

This is really cool! I love the music, mechanic, and of course the art and characters! ^_^

How do you get more character cards?

I am really bad at combining i think, but also i mostly forget what combinations i tried that didnt work.

Hello nami, I hope you read this, maybe they already said it but it was incredible that it had a Spanish translation I would be eternally grateful, by the way your games are the best never change nami(ﾉ◕ヮ◕)ﾉ*.✧

i love it so much, so many possibilities !! ♡

Reply
May Nyan2 years ago

Really nice, I look forward to more whenever it's ready :)

great game, ofc it is in prototype, but i think making the game a long, card battle game and a endless mode after the story mode would be EPIC. Plus i've found 2 killer combos for both decks too. Nami you bloody legend, you surprise me every time i play any game that you contribute to

Reply
not jane2 years ago

how do you make the matilda card

Reply
not jane2 years ago

It's better to go into quick play mode to see all the different card combos :)

i love this game but if only the opponent doesn't play the same cards over and over again. I also wish that there could be different opponents that I can play with. I don't mean like real people.

Well guess what? I'm using a Chromebook so that ain't gonna work!

do your cb  have linux? u can just installthe itch.io client\

I really love this game. The system of how to win was really easy to get and the fusions were adorable. I only have 2 real complaints...

1. The "end": I wish that you could go back and fight older opponents after you beat the demo instead of just being soft locked out of the game.

2. I still don't really understand how the fusions do or do not work. What card beats out what. What fuses. A little bit confusing.

I really wanted to get into this one, but it's just far too frustrating for me to enjoy. It's great to see that you're actively supporting this game with new cards, but in my opinion you should really try to fix more core problems. Issues are listed in order of severity:

Look, I understand you're not trying to create the next Hearthstone here. It might sound like I'm taking this all too seriously. I probably am. But even as a casual game about smacking cute bits of cardboard together, there's just lots of little things that get in the way that I can't just switch my brain off to.

The art and visual design are stellar as always, though.

thank you for such honest feedback! this is my first card game so it's very limited in terms of my design and programming skills--it helps a lot to know which parts are frustrating so that i can rethink them. i'll try to start incorporating some of this in the next update! (a few of them i'm unsure of how to program, but something like showing the opponent's choice first is pretty easy and i agree that it's more fun to be able to strategize with the extra information!)

Glad to hear it! The fact that you made this all in Ren'Py is insane. I can imagine that limiting your options somewhat. For something like this I'd personally reach for a generic game engine like Godot, but that's just me.

yeah! ren'py is the only engine i feel like i understand, so it's more like this is the ONLY way i could possibly make a card game even though it's not intended for things like this at all haha.

ooh programming help would be super appreciated--this project is on hiatus right now but the next time i end up working on it i'll definitely reach out to you! another commenter asked to be able to drag-and-drop cards but i was struggling with getting that to function, so maybe that's something that needs the help of someone with more general coding knowledge heheh

If I can find time outside of my own software engineering work, I could help out in developing a cute game like this ;w;

A game team I'm in is also developing a card game (but not as cute as this), so this is cute o3o

My Syrup's deck has no uncute cards! But it does contain... The Adorable Warm Butterscotch!

love it!!! if you work on it it could be a really great game :) witch pastille is a little hard to figure out but i guess that's the same as in the game, haha
i think you should add frosting, and the characters in their summer outfits!

thank you! i'll write those down~

Amazing game idea I had a lot of fun going though this! The only issue with the game is deck building the interface is super clunky. I believe dragging and dropping cards would make the game more smooth or if you would like to keep the game using the text base format at least having the slider stay in place without the page jumping to the top. But this is a 0.2 version I am a big fan of your games and can't wait to see everyone be added in!

thank you so much for your feedback! i agree that drag and drop would be better, so i'll look into reworking the code next time (i've never done drag and drop stuff in ren'py but i'm sure it's possible!)

Reply
The Mirage3 years ago

This is so adorable! Can I add this idea for my school project?

This isn't exactly a game suggestion, but a comic panel of your characters playing the Another Piece of Candy TCG in the web comic would be really sweet.

Not a game but a useable idea.

Make the page easier to read. (maybe it's just my eye but it's hard to read :( )

my deck has no weak card kaiba , but it has THE CUTE MOCHI IN A SUMMER DRESS

Being a Nami game, I'm sure it will be great

That's so adorable! I'm so glad that you made this game :)

I'll wait for the expansion!

Omg!This is so cute!I am going to play it right now.

This is so adorable!! I love it! Am trying to figure out how to get the meal where they're all together.

From memory, you need to combine Treat with Moxie, then combine the result with Mochi, then add Trick.
EDIT: Yup that's right. 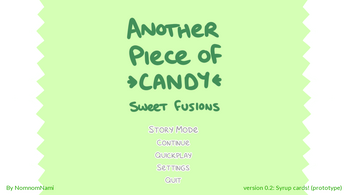 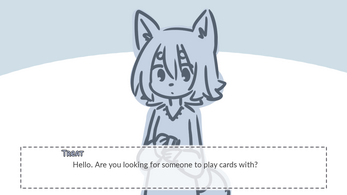 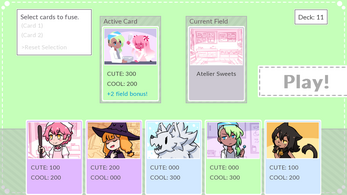 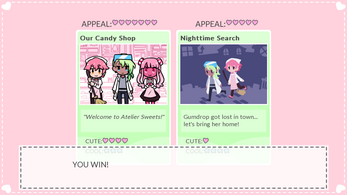 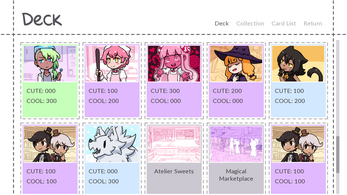