A downloadable game for Windows, macOS, and Linux

HER TEARS WERE MY LIGHT is a visual novel created for NaNoRenO 2016. it's a short love story about time and space.

as time, you can move forward, backward, or warp to any of your “save points” in the story. can you use that power to save space from her feelings of loneliness?

(translations from the previous version will be re-added in the future!)

the android version is still free! you can find it on google play

In order to download this game you must purchase it at or above the minimum price of $3 USD. Your purchase comes with a Steam key. You will get access to the following files:

who else isn't downbad here

this game is so cute and amazing, i'm melting rigth now, thank you so much I cried no sto

New version with bonus content?!?! I still have the free version, but one of these days when I’m not broke, I will be all over the new version…

Incredibly sappy romance?  Hold on, I gotta go check my couch cushions and see if I can find $3. >_>

Was a free-player... What's updated since then? Oh, I see. The updates log is updated... Maybe call it "updated updates" or something?

Aw its paid now, But its okay it was a really good game! I played it when it was free

I played this when it was free its a great game! I LOVE IT SM

jokes aside, i really liked this when i played it in the mobile version (it wasn't in steam by that time) and i really recommend playing!  the relationship between space and Nill (and time) is thrilling, and i couldn't get the true ending and got stuck in the Nill ending TWICE because i couldn't leave the poor bean and when i actually got being the pain of Nill begging us to not reset I GOT THE FUCKING NILL ENDING AGAIN AND HAD TO GO TROUGH THAT PAIN AGAIN AAAAAAAAAA

this is how much the characters inmerse you in, who cares that this is sappy af

Such a touching story without getting too far into the nitty gritty and risking spoilers. I feel so bad for Space.

OMGGGGG THE TRUE ENDING IS CUTEEEEEEEEEE <3

i loved this game so much! literally the story line is so in-depth and honestly made me sad at times... super cute graphics, honestly don't think there's anything i couldn't like about this game

AAAHHHHHHHHHHH not enough there is not enough of this game, oh my god this was better than any novel game I've ever played, AND THE KISS omg beautiful.  Made me cry, so beautiful, 10,000,000,000,000/10  the music the art the characters, I loved every second of it, we need more, I wish i could give you all my money

i didnt even hope to find another game that can be so deep in intellectual aspect AND so emotional at the same time!

1000/10 made me cry a bit plus the mechanics are really amazing :DD

5 stars is not enough to rate it! I'd rate it all stars in the universe!

I really enjoyed this game.

the plot twist of nil !!

This is a very, very emotional game. It has a fantastic blend of all feelings that I wanted. Cuteness, gayness, sadness, happiness, anger, etc. Now I want a part 2 of this game! Yes, right now! I hope my wish will be granted. Thanks NomnomNami! I'll check out all of your games and give you a decent donation amount right now :-)

that game made me feel something, not a lot of games did that, even undertale had less effect

One of my first games by NomnomNami, I simply love it and is my favorite as well, I love the dynamics, characters and gameplay, everything about it is simply amazing

aahhhj  i love this gme so muchh

Everyone is sighing at the beautiful story, and I want to praise it from another angle. Although this game is very short, the programming skills are very elegant. Many Renpy games are just PPT.

At least in terms of multilingual support, this game is a very good example.

When you say PPT, do you mean PowerPoint Slideshow? Also, yes this is quite a beautiful story with admiration from every angle possible. Some of us want a part 2 of this beautiful game.

Ok so this actually a horror game and sometimes cute and pretty for me i liked space's design not only space but nil and time's style is soo adorable!

Sadly, Nil keeps appearring when i try to talk to space its just nil's takeover

This game was cute 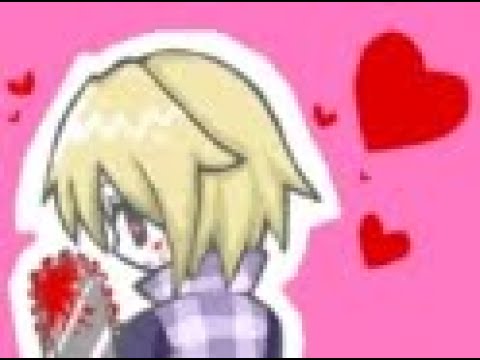 I got the true ending!! I just had to unlock every memory. Also, I love both Nil and Space <3

This game is so lovely and sweet!!

i love this game! its so good but so sad, i really enjoyed playing it

Reply
yumhiko the fairy317 days ago

OKAY NO BUT THIS GAME I SO COOL AND CUTE AND i played it a lot of time because you just can't get tired of this. the art style, story, just everything in this game is perfect. cheff kiss!

I already played this game on a mobile device, but wanted to support it here as well! The soundtrack on Bandcamp is "stellar" as well.

我到现在了还是这么喜欢玩这个游戏（I still love this game so much） 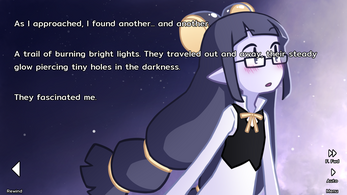 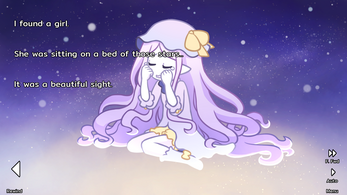 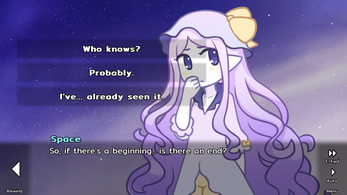 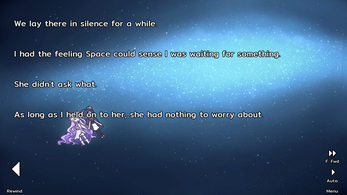 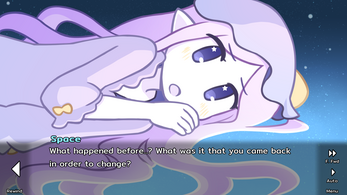 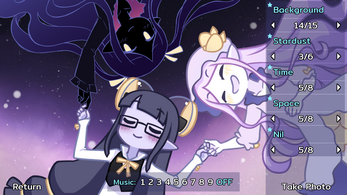