A downloadable game for Windows

KAIMA is the story of a planet being eaten away by monsters, and a girl determined to survive.

this game was made over the course of 2 months, so it's pretty short to run through--takes an hour or so to see everything. there are 5 endings (one is a secret!)

you can get a higher quality version of the soundtrack with bonus tracks over on bandcamp!

follow my ko-fi for updates on game dev stuff, or leave a little tip if you like my games!

The secret ending was unexpected... XD

This game is amazing. The graphics, the soundtrack, the characters and even the color palette! When I first started, I though it was too short, but starting over and finding the other endings was such fun! I truly fell in love with this game, even if it's a simple story, I love it! the way you interpreted it is what made it so unique and special. Keep up the good work, this game will stay in my heart for years surely.

oof im trying hard to get the true end but im confused as to how lol. Do i not kill anyone?

this is so cute! my only problem is that at the end there is a glitch where i can't reclaim my soul :(((( so i can't see the true ending!

I cant save my game whyyyyy

its so cute and wholesome! i got the true ending and im thinking about trying the other endings too. thank you for this! hope to see more from ya.

i absolutely love it. ive fallen in love with the soundtrack and the characters are the type that i keep replaying the game to meet again and again. wish i could play it again for the first time. (do you think there'd ever be a sequel?)

i honestly started making a sequel but i couldn't figure out the ending so i haven't been able to finish it. thank you for playing my game :)

oh yay! I'll be here to play it, even if you finish it years from now. thanks for making a cute game <3

this game is perfect for a sequel

Hi! I would like to ask permission to translate your game into portuguese. Would you authorize me?

sure! my email is listed on my itchio profile, if you message me i can send the files along. thanks!

Hi! Of course, I will send the email. Thank you!

I was drawn by the philosophical tone of this game, and I enjoyed the short and sweet story. The gameplay was simple, and, the different endings each gave a powerful tone shift to the story. A simple game, but very memorable!

I love this I got all the endings and just keep up the good work im obsessed with your games now! :)

Any chance of this lovely game being ported to Android? :D

i'm not able to port rpg maker games at the moment unfortunately, so there are no plans right now.

make it on mac plez

good game.
but I don't really get how to get the good ending.
got the indifferent ending, the bad ending.

nevermind. not attacking does make a difference.

I had alot of fun playing this and finally got all of the endings. It took so long to find it but I did it after messing around a bit. You're very sneaky( ͡° ͜ʖ ͡°). but it was really fun and enjoyable.

Why does this game have LGBT tag? I don't remember this game to have any LGBT elements. Is this subtle way to imply that there will be romance between Searina and Illi?

illi was in love with ezel and wanted to be with her. but yeah it's also left open for illi and searina to develop into something after the true ending.

Wow, really? I thought that Ezel was a dear and very close friend for Illi, but not a love interest.

i guess when a girl says "i love her" everyone assumes it's friendship. sorry that it wasn't more clear, ezel devoured a bunch of demons who were in love with her so really illi was just next in line, though she thought ezel's affection was real, that's why she struggles with it so much in the true end path.

"i guess when a girl says "i love her" everyone assumes it's friendship." (FACEPALM) Oh, stupid me. It was long time ago when I played KAIMA, so probably I missed this part. =)

"ezel devoured a bunch of demons who were in love" Wait, I thought she ate her loyal followers, basically cultists (I mean there was personality cult of her. Although you could argue that they loved her, although it would be non-romantic love).

the followers thing is pretty vague yeah but it can be all kinds of love. maybe ezel had a sex cult lol

what name is app to make this game ?

this game was made in rpg maker vx ace

SPOILER WARNING FOR ANYONE WHO DID NOT PLAY

So first I got True End, where SEARINA reunites with her soul.  Basically a happy end? Just don't kill VIDO and ILLI then you get it.

Then I got GAME OVER,  by when I started,  I ran straight into the black thing-a-ma-bob and died.  It's kinda cool that I'm the only one that can save KAIMA.  Oh and I experimented, and if you go ANYWHERE WITHOUT ILLI,  you get that ending.

Next I got Normal End, I ran straight through the path WITH ILLI, we killed VIDO, EZEL was freed, (it might be wrong bad memories :b) and yeah ILLI went with her...

Then I got Indifferent End, by listening to VIDO'S story then killing him. SEARINA said she had a bad feeling, but it ended the same like Normal End. However, it said, "Are you really going to accept this ending?" If you say Hella No, then it takes you  back where you get to choose to stop ILLI from killing VIDO or not.  IIf you say Yeah, it says "Suit yourself."

Last, I got Bad End. When you fight ILLI, if you kill her, you become partners with EZEL.

This is quite short, but has a deep setting into it.

Thanks for making all these games, Nami <3

how did you not kill him?
i mean, you can make him free her, but then he will get killed by the other girl anyways.
and you'll be forced into a fight with your frined anyways.

did I miss a step?

Or should I have not side tracked and instead went straight for the boss when coming to the intersection for the first time?

super late, but if you just dont help anyone and get all the chests then go fight him then Illi kills him

Nami I luv your games <3

Really cool game, got the secret ending as my second ending ;)

Would it be possible to get a Mac version~?

rpg maker is pc only, sorry :( but if you use a program called wine,  you can run the game just fine through that!

has anyone got the Secret Ending? I find it a lot more difficult to get as I am trying to figure out a way to get certain endings based on the amount of levels that both Searina and Illi have.

So far, I hardly tried getting the Secret Ending based on Level 1 as I either kill Vido or get killed by him  whenever I keep on finding a way to get to Ezel and get killed by her on purpose. It is so annoying! I wonder if the game is being bugged or something?

*Updated* I found it but I somewhat found it a bit disappointing that Nami didn't spend a lot of time expanding that point afterwards which could lead to Illi being the main protagonist instead of Searina whilst at the same time have both of the girls fight off against each other along with Vido (and possibly even Ezel as well).

I got the secret ending after another user pointed it out and updated this comment straight after. I am just a bit disappointed that Nami didn't branched out that ending and made Searina the main antagonist along with Vido whilst at the same time have Illi become the new female protagonist instead.

sorry, the program i made this game in is windows only. but you can use a program called wine to play it! i've never used it myself so i can't offer instructions on how, but i've heard a lot of people got it to work through that so i hope it's not too difficult?

How many endings are there? I had already completed three so far; Bad End, Indifferent End and True End.

Okay Thanks! I will work hard to get the other two ending, especially the one that is kept as a secret! :)

<Updated>: I got the other two which was the Game Over and Normal. I like it overall but I think you could add more levels in to make the game a little bit longer. Oh well, I supposed you wanted to creative this game as a fun thing rather than just make it all serious as well as at the same not doing it for the sake of it.

What was this made in?

Nice! Any plans of an RPG Maker MV port?

no, that would mean i would have to redraw all the assets to be the right size and i don't have time for that haha

Well I do have software that would scale up the images to MV standards. I wouldn't mind trying to see if I could port it over to MV.

i feel like there'd be quality loss because it's like 1.5 scale instead of a clean 2... but if you send me an email i can give you the game files to play with. contact info is on my profile. thanks!

wow thank you so much!! glad to be a gateway developer(?) bringing new folks into the land of yuri games heehee. more games are always coming, slowly but surely~

I'm just asking (you don't have to awnser) how old are treat,moxie,mochi,and trick? like 16-18 years old?

Well, i think...
I send to you email, with translation.

Good afternoon. Can I transfer your game on the Ukrainian language? Translation can be somewhat, not very reproducing the intonation of the game, but I try. (Yes, I started because I was clever ass))))

yeah that would be great! email me if you need anything, have questions, etc. (my email is listed on my profile)

Ok, translation is ready) I need few test`s, after, i send you e-mail arhive)
*also my conversational skills are worse than shifting skills, so that to apologize for mistakes in the text and text of e-mail*

For some reason the health of the character stays the same, even in a new game, and i can't fight without dying

try to avoid fighting until you pick up your other party member! she can heal haha

Oh, thanks for reply!

Really beautiful game, but I have the feeling that I just played a DEMO of it. Don't get me wrong, it was great, but, I feel like it should have been longer and with more character development.

If you are going to release a "complete version", I would happily buyed it.

This was really cool <3 You used the RPG framework in really interesting ways & it was cool how many different paths were in such a short game. The writing of the soulless character was rly interesting and something I've never seen before. The art was also super pretty. Thanks for this game!

if you click "download now" there is a file called "KAIMA.rar (spanish)", that's the one you want! 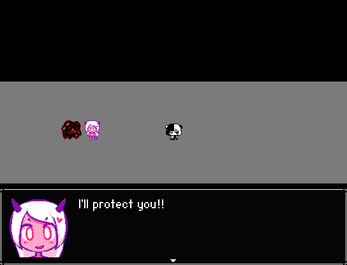 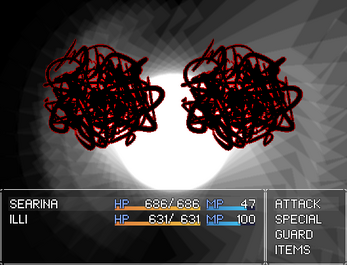 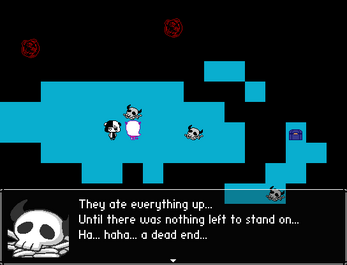 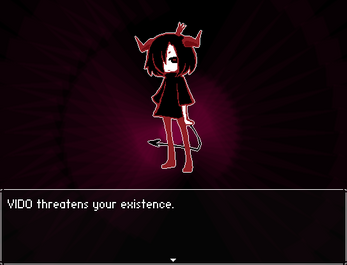